Nutrition – an important requirement for health

On his travels Alfred Vogel studied the diets of people who were still living a primitive way of life. He was looking for ‘convincing ideas and arguments’ to support his theory that these people rarely or never suffered from the so-called diseases of civilization such as rheumatism, gout, hyperacidity, cancer or heart attacks. He wrote:

‘I consulted many indigenous people. I stayed with Indians in North, Central and South America; in Africa I visited those native tribes who still lived by the old customs and way of life. Likewise I was interested in those people who lived near the Himalayas of whom it is said their lifestyle is the most natural possible. I also investigated the lives of the Polynesians and Melanesians on various South Sea islands’.

Alfred Vogel visited Tahiti in the late sixties. The image shows Alfred Vogel on the island of Moorea (Cook Bay).

And now we come to the subject of diet, a subject that preoccupied Alfred Vogel at all times. We have already informed you that as a young man he fed himself with raw food, for decades thereafter he was a vegetarian, and every once in a while in his later years he was not averse to fish or a piece of white chicken. For him a ‘correct’ diet meant, above all, moderation in eating. This small, able-bodied man was proud of the fact that he had maintained a weight of 60 kilos throughout his life.

As a young, talented gymnast he fed himself on raisins, dates, almonds, apples and dried bananas. In the meanwhile his gym colleagues continued to eat raw eggs and sustaining protein food to increase their physical prowess. In his magazine he stated:

‘I did not dare to confide my opinion to my colleagues as they would have laughed at me were it to be contrary to the prevailing views in sports circles at that time ... it was difficult having your own ideas as I often learned through bitter experience.’

In 1926, already the owner of a health store in Basle at 24, he proved himself as a nutritionist and ranted in his brochure Kleiner Wegweiser für Lebensreform (A Small Guide To Life Reform), against the ‘ghost of the modern food industry’ which, due to the supply of inferior foodstuffs, ‘strangled appetite for life’. In this booklet he explains substandard foodstuffs that have been robbed of ‘their vitamins and goodness’ by means of ‘chemical and mechanical preparation processes’. The young shop owner skilfully linked this information to his own range of goods, the healthy benefits of which he then described.

For Alfred Vogel ‘healthy nutrition’ was based on eating ‘natural products in their most unadulterated form’ (wholefood products, wholegrain rice, unrefined sugar). Equally important for him was the rationing of animal fat and protein as well as the omission of harmful products such as alcohol, coffee and tobacco.

He wrote books and delivered numerous lectures on the subject of nutrition – Nutrition as a Healing Factor, Poison in Food, Diseases of Civilisation as a Result of Poor Nutrition or The Question of Protein. All too often the naturopath had to enlighten his patients on the relationship between poor liver function and over-consumption of animal protein and fats. When a good friend died from a liver complaint he decided to write down his experiences and knowledge on the ‘basic principles of good health’ and ‘the most wonderful laboratory’ in the body.

The book with the somewhat disturbing yet nevertheless accurate title ‘Die Leber reguliert die Gesundheit’ (The Liver as a Regulator of Health) appeared in 1960 and was produced three years later in four foreign languages. It deals comprehensively with nutrition and diet, medicinal plants and physical measures for care of the liver, gall bladder and pancreas. In addition he kept himself very busy with ‘recipes’ for healthy foods. Especially close to his heart was wholemeal bread. In 1953 he proudly stated, ‘ (I) have now launched a natural bread under the name of A.Vogel’s Flockenbrot that has the same content as that used by primitive people’. Nevertheless he strove for years to improve his recipe 26 for good, light wholemeal bread – and reported on this in detail in Gesundheits-Nachrichten (A.Vogel Health News).

Read more about the stories of A.Vogel:

A.Vogel Herbamare - My Taste. My Salt. 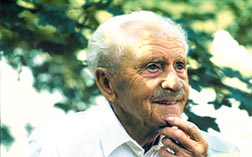 About our company 

Everything from A - Z. Or to be more precise, from Achillea millefolium to Vitex agnus castus.